All English class-specific titles are part of our core curriculum and are chosen to support the work you will do throughout the year. Click on the title of your Form below to read a review with a link to the book. Knowledge of these Form titles will be assessed immediately upon your return to school. 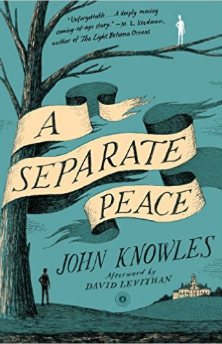 A Separate Peace by John Knowles

An American classic and great bestseller for over thirty years, A Separate Peace is timeless in its description of adolescence during a period when the entire country was losing its innocence to World War II. Set at a boys' boarding school in New England during the early years of World War II, A Separate Peaceis a harrowing and luminous parable of the dark side of adolescence. Gene is a lonely, introverted intellectual. Phineas is a handsome, taunting, daredevil athlete. What happens between the two friends one summer, like the war itself, banishes the innocence of these boys and their world. - Amazon Review

City of Thieves by David Benioff

From the critically acclaimed author of The 25th Hour and When the Nines Roll Over and co-creator of the HBO series Game of Thrones, a captivating novel about war, courage, survival — and a remarkable friendship that ripples across a lifetime. During the Nazis’ brutal siege of Leningrad, Lev Beniov is arrested for looting and thrown into the same cell as a handsome deserter named Kolya. Instead of being executed, Lev and Kolya are given a shot at saving their own lives by complying with an outrageous directive: secure a dozen eggs for a powerful Soviet colonel to use in his daughter’s wedding cake. In a city cut off from all supplies and suffering unbelievable deprivation, Lev and Kolya embark on a hunt through the dire lawlessness of Leningrad and behind enemy lines to find the impossible. By turns insightful and funny, thrilling and terrifying, the New York Times bestseller City of Thieves is a gripping, cinematic World War II adventure and an intimate coming-of-age story with an utterly contemporary feel for how boys become men. - Amazon Review 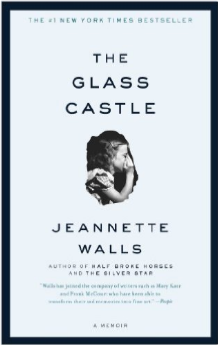 The Glass Castle: A Memoir by Jeannette Walls

Leannette Walls grew up with parents whose ideals and stubborn nonconformity were both their curse and their salvation. Rex and Rose Mary Walls had four children. In the beginning, they lived like nomads, moving among Southwest desert towns, camping in the mountains. Rex was a charismatic, brilliant man who, when sober, captured his children's imagination, teaching them physics, geology, and above all, how to embrace life fearlessly. Rose Mary, who painted and wrote and couldn't stand the responsibility of providing for her family, called herself an "excitement addict." Cooking a meal that would be consumed in fifteen minutes had no appeal when she could make a painting that might last forever.

Later, when the money ran out, or the romance of the wandering life faded, the Walls retreated to the dismal West Virginia mining town -- and the family -- Rex Walls had done everything he could to escape. He drank. He stole the grocery money and disappeared for days. As the dysfunction of the family escalated, Jeannette and her brother and sisters had to fend for themselves, supporting one another as they weathered their parents' betrayals and, finally, found the resources and will to leave home.

What is so astonishing about Jeannette Walls is not just that she had the guts and tenacity and intelligence to get out, but that she describes her parents with such deep affection and generosity. Hers is a story of triumph against all odds, but also a tender, moving tale of unconditional love in a family that despite its profound flaws gave her the fiery determination to carve out a successful life on her own terms.

For two decades, Jeannette Walls hid her roots. Now she tells her own story. A regular contributor to MSNBC.com, she lives in New York and Long Island and is married to the writer John Taylor. - Amazon Review

From the Booker Prize-winning author of The Remains of the Day comes a devastating new novel of innocence, knowledge, and loss. As children, Kathy, Ruth, and Tommy were students at Hailsham, an exclusive boarding school secluded in the English countryside. It was a place of mercurial cliques and mysterious rules where teachers were constantly reminding their charges of how special they were.  Now, years later, Kathy is a young woman. Ruth and Tommy have reentered her life. And for the first time she is beginning to look back at their shared past and understand just what it is that makes them special–and how that gift will shape the rest of their time together. Suspenseful, moving, beautifully atmospheric, Never Let Me Go is another classic by the author of The Remains of the Day. - Amazon Review